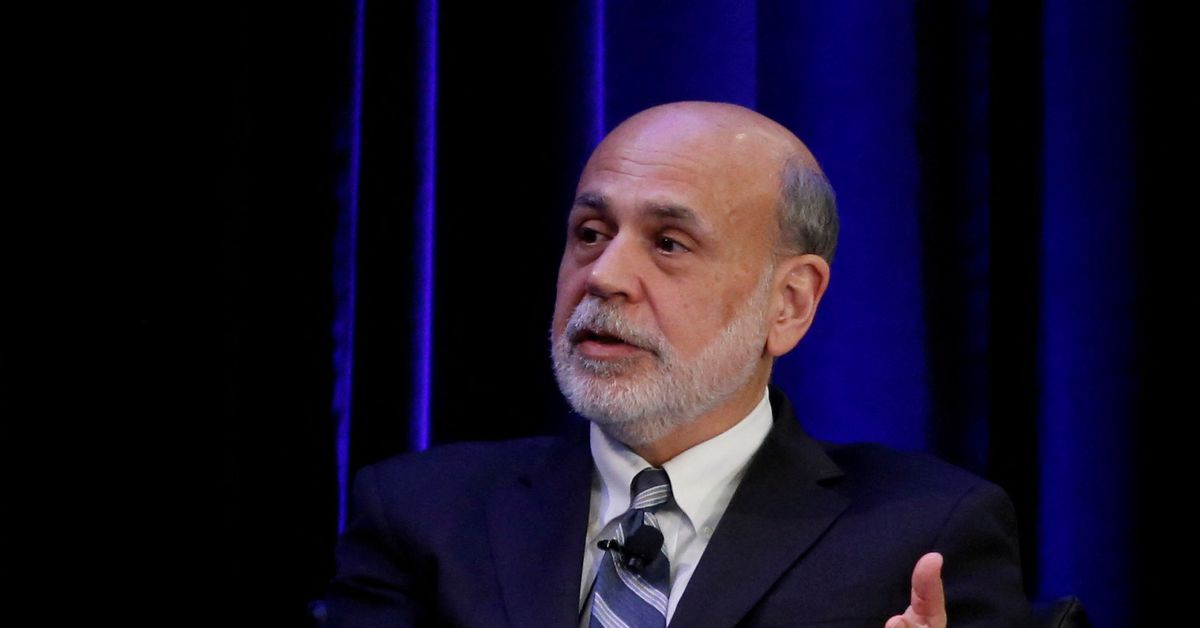 LONDON, Oct 10 (Reuters Breakingviews) – Rarely has an academic put theory into practice like Ben Bernanke. The former Federal Reserve Chairman won the Nobel Prize in Economics on Monday, along with two other scholars, for research published on banks and economic crises in the early 1980s that informed his response to the global financial crisis a quarter century later. Yet the resulting era of strict banking regulations and ultra-low interest rates has contributed to increased risks in financial markets that are only slowly manifesting.

Bernanke’s research and that of fellow laureates Douglas Diamond and Philip Dybvig places lenders at the heart of economics. The main reason the Wall Street crash of 1929 turned into a years-long depression, Bernanke found, was that a series of bank failures choked off the vital flow of funds from depositors to credit-hungry businesses. . Diamond and Dybvig, on the other hand, elucidated the process known as maturity transformation, by which banks transform short-term savings into long-term loans. Academics have shown that this practice is economically essential but also risky, since customers can withdraw their money at any time, making government deposit guarantees essential.

Bernanke’s track record made it all the more surprising that as Fed Chairman he was slow to grasp the scale of the simmering meltdown, saying losses on US subprime mortgages will not impact the financial system in May 2007, a few months before the global crisis. started. His understanding of bank failures didn’t stop the Fed and other authorities from allowing Lehman Brothers to fail in 2008, setting off a panic that nearly brought down the rest of Wall Street. The wave of bank bailouts that followed, at least, bore the imprint of Bernanke’s research and averted a global depression. Subsequent capital and liquidity regulation of lenders reduced the chances of another wave of 1930s-style failures.

The problem is that by avoiding a crisis, the watchdogs have pushed the risk elsewhere. Loosely regulated derivatives markets, for example, have come close to exploding several times in recent years. In March 2020, self-perpetuating margin calls caused investors to sell US Treasuries to raise collateral, eventually forcing the Fed to intervene. Highly leveraged UK pension funds suffered a similar episode recently.

More generally, so-called shadow banks have filled the voids left by traditional lenders. Assets held by entities such as money market funds, insurers, asset managers and hedge funds grew by 5.9% annually between 2014 and 2019, compared to 3.7% for banks. In 2021, they accounted for around half of total global financial assets, compared to two-fifths for banks. Years of accommodative monetary policy, under Bernanke and his successors, have pushed many of these market players to take on more risk. The odds of another market-based explosion increase as interest rates rise. This should fuel the work of a future Nobel laureate.

(The author is a Reuters Breakingviews columnist. The views expressed are his own.)

Ben Bernanke, Douglas Diamond and Philip Dybvig have won the 2022 Sveriges Riksbank Prize in Economic Sciences in Memory of Alfred Nobel, the Royal Swedish Academy of Sciences announced on October 10.

The prize recognizes their “fundamental research on the role of banks in the economy, particularly during financial crises”.

The opinions expressed are those of the author. They do not reflect the views of Reuters News, which is committed to integrity, independence and non-partisanship by principles of trust.

NDIC wants Nigerians with funds trapped in 20 failing commercial banks to come and get their money, process reveals