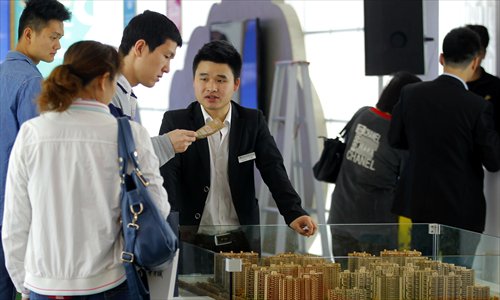 An employee at a Bank of Communications branch in Shanghai told the Global Times on Monday that the bank had cut rates for first-time home buyers by 5 basis points (bps) to 4.65%.

The bank also cut the rate for second homes to 5.2%, also down 5 basis points.

“It’s hard to say if the mortgage rate will change more in the near term. Maybe it will, with the changes in the loan prime rate (LPR),” the person said.

A staffer at the Industrial and Commercial Bank of China (ICBC) in Shanghai said the bank was offering mortgages at 4.95% to first-time home buyers, also down 5 basis points.

In Beijing, ICBC’s rate for first-time buyers is 5.15%, down 5 basis points, a Beijing-based ICBC personal credit officer told the Global Times on Monday.

The PBC also cut the five-year LPR by 5 basis points to 4.6% this month, a move that experts said would benefit the real estate sector, which is suffering from tight liquidity and demand. weak.

“The five-year decline in the LPR is a strong signal from the government that it intends to stabilize the property market. It can also be seen as a signal that the property market has bottomed out and will start to rebound,” said Zhou Maohua, an analyst at Everbright Bank, told the Global Times.

As banks gradually cut mortgage rates following the PBC’s decision, experts see a rebound in home purchases this year as consumers and businesses face lower costs to buy homes or invest in building them .

Yan Yuejin, a veteran in the real estate market, said property prices in China are unlikely to continue falling this year. He predicted that transactions could increase, but by less than 5%, this year.