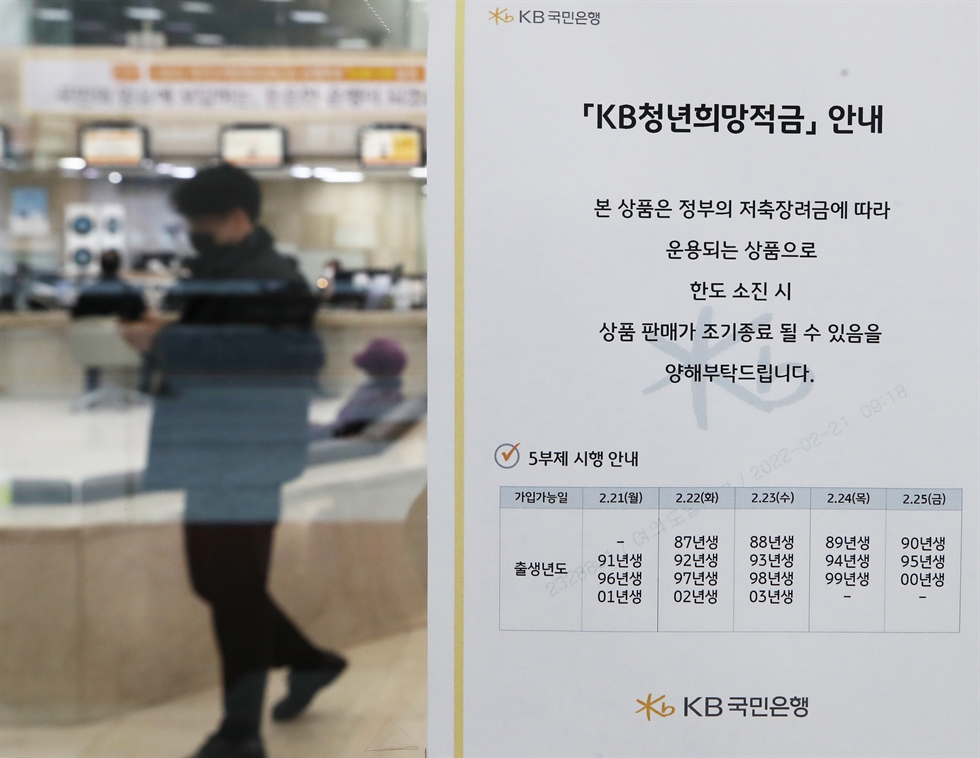 Commercial banks weighed down by funding for Moon’s savings aid

Commercial banks weighed down by funding for Moon’s savings aid

As a state-guaranteed savings product available exclusively to young people ended up receiving nearly 3 million customers, the burden on banks related to the savings product is expected to exceed at least 1 trillion won (815 million of dollars). This is just one of the instances in which financial firms have had to sacrifice their financial strength while executing government policies that run counter to market principles.

The state-backed savings product, dubbed “Youth Hope Savings”, was originally intended to be sold to just 380,000 applicants, with 45.6 billion won budgeted by the government. Only people between the ages of 19 and 34 with an annual income of less than 36 million won were eligible to apply for the savings product.

The product whose yield is promoted up to 10% went on sale on February 21 for two weeks in 11 public and commercial banks. But it has attracted more than 2.9 million customers subscribing to the savings account, almost eight times more than the quota of subscribers planned by the government.

The government quickly increased its quota to 380,000, allowing anyone who met the conditions to open an account. The government is also considering reopening product registration in July and August.

As the government celebrates the success of the special savings product, it now appears that it is the banks that will actually be responsible for the exceptionally high returns from savings accounts, beyond the government allocated budget of 45.6 billion. of won.

Critics are rising within the banking sector. Market insiders say the government’s failure to forecast demand has been blamed entirely on the banks.

“As more than 2 million people signed up to receive information about the savings product, it was clear that a lot more people would flock to the product than the government had anticipated,” said one. banking industry insider.

Regarding these criticisms, the Financial Services Commission (FSC) explained that the government had consulted closely with the banks about the additional costs involved in selling the product.

“The Youth Hope Savings product was sold after close consultation with the banks as well as the Korean Banking Federation. The banks showed their willingness to actively participate in the program with the aim of contributing socially and attracting future customers,” the FSC said earlier this week. .

The government takes for granted the sacrifice of the banks

Still, financial market insiders point out that the government has continued to shift the burden onto financial firms with other financial policies during the pandemic shock.

Under the direction of the government, the maturities of loan products for small business owners have been repeatedly delayed. Loan repayments were delayed for the fourth time in February, despite the government’s earlier goal of removing the backlog by the end of March. Banks were bearing a total of 170 trillion won in loans and late maturities as of the end of last November.

Although some say that the financial groups could bear the burden, given that they have recorded unprecedented net profits in recent years, some still criticize the attitude of the government which takes the sacrifices of the banking sector for granted in the name of of its own political objectives.

Is the banking system really ready for the “big change”?