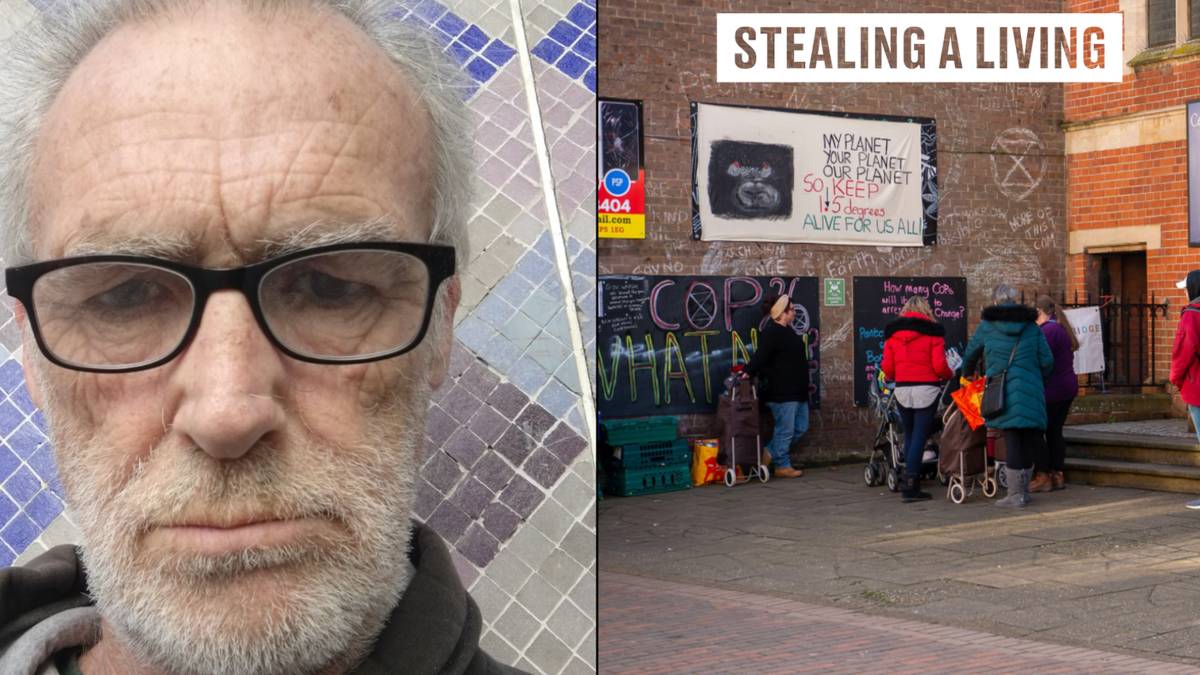 Food bank crisis as demand soars but donations dry up

Ten years ago, Sean had the life that many of us can only dream of. As a rigger in the live music industry, he traveled the world with U2 and Bon Jovi, setting up stages and sound systems for huge crowds in some of the world’s biggest venues.

But overnight, his livelihood was taken away from him.

He was diagnosed with multiple sclerosis in 2012 and without a regular income he had to use food banks for several years.

“I have a small electric heater in one room and I go to the leisure center to take a shower. I don’t use gas in my house anymore because I can’t afford it. It’s hell.”

The 58-year-old is now a volunteer at the Lewisham Food Bank and says life is a struggle for many like him – with no signs of the situation improving.

Food banks in the UK are in crisis – and fear they will not be able to meet the growing demand from people in need.

Over the past year, more than 2.1 million emergency food parcels have been distributed to the most marginalized people, who are forced to rely on the kindness of strangers to survive.

But it’s not just food, the centers also offer the basics most of us take for granted, from deodorant and toothpaste to tampons, toilet paper and diapers.

According to The Trussell Trust, between April and September 2021, centers distributed around 5,100 emergency packages each day, a 75% increase on the same period five years earlier.

And this year, charities expect to see record numbers of people in need as the cost of living crisis takes hold.

“It’s horrible, the number of people coming now compared to what it was,” says Sean.

“Every week there are 30 or 40 people lining up outside looking for donations. And I don’t understand where they’re coming from.”

Figures released by the Office for National Statistics last week showed 23% of Britons say they are struggling to pay their bills, up from 17% last November.

Simply put, more and more people are having to tighten their belts, resulting in a shortage of donations to food banks – yet millions are turning to them for help.

Sean says he’s not getting the necessary benefits because he says he’s apparently ‘not disabled enough’.

And with each week seeing him more and more in debt, he doesn’t know what to do.

“I get hardly any money anyway. I have to pay an extra £40 for my rent because housing benefit doesn’t cover it.

“It’s just every week, there’s another bill coming in, and it’s pushing me deeper and deeper into shit. And if it wasn’t for the food banks, I’d be stuck.”

He adds: “Unless you are disabled, there’s no way you’ll understand what it’s like to be disabled in this country.”

But it’s not just people like Sean, who say they’ve been neglected by the system for years, who are struggling to make ends meet.

Fuel prices have reached record highs, while families have to spend an average of £180 extra a year on their grocery store.

And the price energy companies can charge customers has risen by 54%, further stretching the finances of more than 20 million households and forcing many full-time workers to use food banks for the first time.

Anna Maughan is the coordinator of the Finchley Road Food Bank in London.

She says the needs in her community have skyrocketed during the pandemic, but she’s scared from what she’s seen in recent weeks and months.

“More recently, our numbers have almost reached 500 people, so we are seeing up to 15 new families a week.

“And we’ve seen more and more people coming in who are working but still struggling.”

The Trussell Trust runs a network of 1,200 food banks across the UK.

According to its annual report, there was a 22% increase in the number of emergency food parcels distributed in the UK between January and February this year compared to the same period in 2020.

Rory Weal, director of policy and public affairs at the trust, says: “These two factors – a weakened social security system and extremely high costs – are conspiring to create record levels of need and a real acceleration, which is obviously very worrying for us..

“What we see in food banks is that the level of poverty is so deep that it’s more accurately referred to as destitution, and it’s really about not being able to afford the absolute necessities .”

He adds: “This is a crisis of a similar magnitude to what we have seen during the pandemic.”

She explains: “We are entering a different phase that is not related to the pandemic; it is now related to the cost of living, whether it is food prices or fuel prices, which are simply incredibly expensive.

“We have yet to really see the impact on the cost of the electricity and gas hikes, for which we expect higher figures.

“It means we’re really starting to think about the different foods we give our customers, so rather than rice and pasta, we want pre-cooked rice or noodles, which you can just add hot water to instead of cook them properly.”

And as people who have traditionally donated to food banks have to cut spending – and in many cases are now turning to them for help – Anna says she and other volunteers are having to ration items.

“Over the past month we have had to reduce the amount we give to people to make sure we have enough for everyone,” she says.

“We see all kinds of people coming in. People who were donating to food banks and never thought they would visit one.

“And that can be very distressing for people, because visiting a food bank is not a very dignified experience.

“Obviously we do our best to make it a good experience for everyone, but often people are very, very worried and also embarrassed about their situation, and it’s such a shame that people feel like that about something. it’s a basic human right.”

Due to the scale of the need, Sean says centers actually have to reduce their opening hours or even close because they simply cannot keep up with the demand.

And he fears that if nothing is done soon, others will follow.

He warns: “There are already folding places, I know full well that there are.

“Lewisham Donation Hub is donating food at the moment and they don’t know if they can continue.

“Some social supermarkets are getting fewer and fewer donations, so they have to close on certain days, so they are already getting thinner on the ground.

“And we’re only at the beginning, it’s going to get worse.”