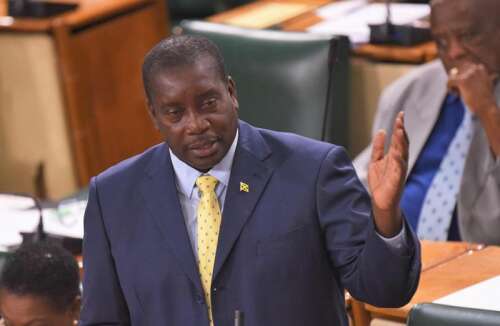 St Mary Western MP Robert Montague of the Jamaica Labor Party lambasted the country’s commercial banks on Wednesday, accusing them of putting profits before people as he ripped at their “poor customer service”.

Montague went on the offensive while making his first contribution to the state of the precinct debate in the House of Representatives.

Speaking on behalf of his constituents, he urged Finance Minister Dr Nigel Clarke and the Bank of Jamaica (BOJ) to take action to ensure banks adhere to the terms of their licenses.

“The people of Western St Mary are struggling to meet their banking needs as commercial banks have all stopped using cash and are charging fees as if it is going out of fashion. We believe that banks put profits before people,” the former national security minister said. He was particularly irritated that banks were charging interest on so-called dormant accounts.

“I am told that the banks credit your account at least twice a year with interest. If so, that means every account has activity at least twice a year. If this is true, how can an account be inactive? On what basis do they charge dormancy fees? questioned Montague. He argued that if there is no activity on these accounts, “the banks need to tell us what they are doing with the interest earned on these accounts.”

“If they loan people money and don’t return some of the interest earned, that’s not just fraud, that’s outright theft,” he said while urging Clarke and the BOJ to investigate and fine banks.

“In addition, all dormant charges billed over the past seven years must be repaid with interest. This is an official report on the matter. If the banks refuse to refund and stop the practice then Minister (Clarke), then you should report the matter to the police,” Montague added. He told his government colleague that it was time for poor delinquent bank customers to get redress “and that’s why we look to you”.

Montague also accused banks of being reckless with their customers’ personal information. He said that when customers deposit money at ATMs, “banks now entrust my money to a third party to collect, count and credit my account. My information is in the hands of a BPO (business process outsourcing) operator without my knowledge or consent. If that third party doesn’t deposit my money on time, the bank then proceeds and charges an overdraft fee, again, no standard of operation.”

Continuing, he said, “My information may be sold to lotto scammers, they are scamming now in the island. A new industry has started. Many people see funds disappearing, credit cards building up massive balances, and all sorts of fun activity on their accounts. But the banks do not hold themselves accountable; they hold the people of Western St. Mary and other rural towns accountable”.

“The finance minister and the BOJ must act,” he said.

And Montague suggested there is a double standard in how banks are treated versus how public passenger vehicle operators, especially taxi operators, are treated. Stating that possession of a banking license is a privilege, Montague noted that the license issuer, the BOJ, can control the offending entity.

“Don’t tell me that neither you (Clarke) nor the BOJ have the power to do this. The government has a big stick, use it,” Montague demanded.

“How do you run over a taxi driver? He also has a license and you beat him when the serve is not up to par or if he breaks. Or is it only for the poor that we have strength? If you can’t touch or brake the banks, then don’t touch the taxi operator. There must be one rule, one principle for all, ”said the MP for Western St Mary.

He said banks should have 60 days to get their houses in order. He said he was only asking for better customer service from financial institutions and insisted there must be operating standards and penalties for breaches.

He also told the House that his constituents wanted a longer transition period before banks no longer use cash.

“We agree that cashless is the way of the future, but this decision is too sudden. Elderly people are forced to expose their account information and PIN because they cannot handle the ATM process. People are at the ATM ready to help them and then steal money from them,” he said.