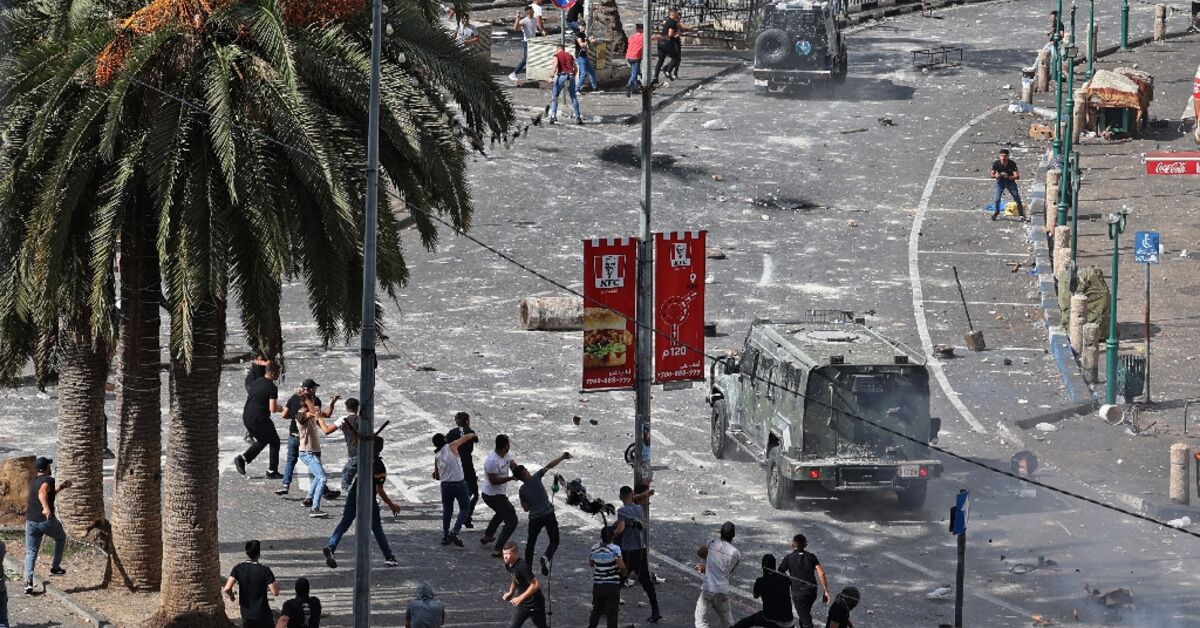 Shootings in central Nablus, with young Palestinians battling police and setting fires to the city’s lockdown, signal growing chaos in the northern West Bank that could spiral out of control.

The transformation of the city center into a combat zone occurred without obvious warning. On Saturday, shoppers rushed peacefully through bustling downtown markets.

But early Tuesday, Palestinian Authority security forces carried out a rare operation to arrest a prominent member of the Islamist group Hamas, Musab Shtayyeh, angering many Nablus residents, who accuse the PA of being pawns Israelis and to tacitly accept the occupation of the West Bank.

Shortly after the arrest, central Nablus was a no-go zone. Youths threw rocks at PA armored trucks and set fires in the streets as the sound of gunfire echoed through the city.

AFP spoke to several people in Nablus, most of whom requested anonymity, fearing reprisals if they criticized the PA and its 87-year-old president, Mahmud Abbas, whose popularity in the West Bank has soared historically low.

“There are tensions because of the arrest of Mussab Shtayyeh by the Palestinian forces and we are targeting them because they are coordinating with the Israeli occupation forces,” said Hamza, a young man in his 20s. ‘years.

A young Palestinian journalist, who declined to be named, said that beyond Shtayyeh’s arrest, “deeper” factors fueled Tuesday’s violence.

He said the youths fighting the PA were not linked to Islamist groups Hamas or Islamic Jihad, nor were they disenchanted members of Abbas’ secular Fatah movement.

“These are young Palestinians, part of a new generation that is not under anyone’s thumb and is angry with Israel and the Palestinian Authority.”

The northern West Bank has seen near-daily unrest in recent months, but it has usually involved Israeli troops and Palestinian fighters.

Israel has carried out hundreds of raids in the area since March, pursuing militants it accuses of being involved in a series of deadly attacks on Israelis.

Dozens of Palestinians, mostly fighters, were killed in Israeli raids that hit several towns and villages, including Nablus and especially near Jenin, a historic militant stronghold.

Among those killed was an 18-year-old fighter named Ibrahim al-Nabulsi, who since his death in August has become a popular social media hero, nicknamed the “Lion of Nablus”.

An image of him – with his square jaw, black beard and assault rifle in hand – adorns pendants for sale in Nablus’ markets, and his photo is plastered on the windshields of scooters that criss-cross the city .

His mother Huda, her head wrapped in a pure white scarf surrounded by photos of her late son, said “when he was younger, Ibrahim was sweet”.

“He loved the design,” she said. “But the injustice that surrounded him brought him to the other side.”

His father Alaa said the relentless Israeli raids on their communities made young Palestinians feel abandoned by the PA.

“The younger generation is not crazy but they grew up under occupation, all they know is raids and injustice and that has made them deeply angry,” he said.

“The increase in Israeli raids in Jenin and Nablus weakens the Palestinian Authority and creates an additional distance between the PA and the population,” he told AFP, avoiding direct criticism of the Palestinian president.

It was not immediately clear why the PA decided to arrest Shtayyeh and Amid Tbaileh, another Hamas member detained with him.

But Israel regularly calls on the PA to take tougher action in areas of the West Bank nominally under its control, including cities like Nablus.

Last week, after two Palestinians and an Israeli soldier were killed in clashes near Jenin, Israeli Prime Minister Yair Lapid said he “would not hesitate to act where the Palestinian Authority does not maintain ‘order”.

Writing in the Israeli newspaper Maariv, prominent security commentator Alon Ben David said the wave of army raids had “further eroded the disputed status of the Palestinian Authority”, with conditions ripe for a new intifada, or uprising, such as those from 1987 to 1991 and 2000 to 2005.

“Israeli officials have been talking for years about the need to prepare for the aftermath of Abu Mazen (Abbas)…but practically speaking, that day is already here,” he said, arguing that the authority of the president is minimal and that the battles for the succession are already in progress. brewing.

The mix of intra-Palestinian violence and anti-Israeli resentment “is likely to morph into a new Palestinian Intifada growing before our eyes, Intifada 3.0”, he said.

bank in india: the liquidity of the banking system becomes deficient, for the first time in more than three years