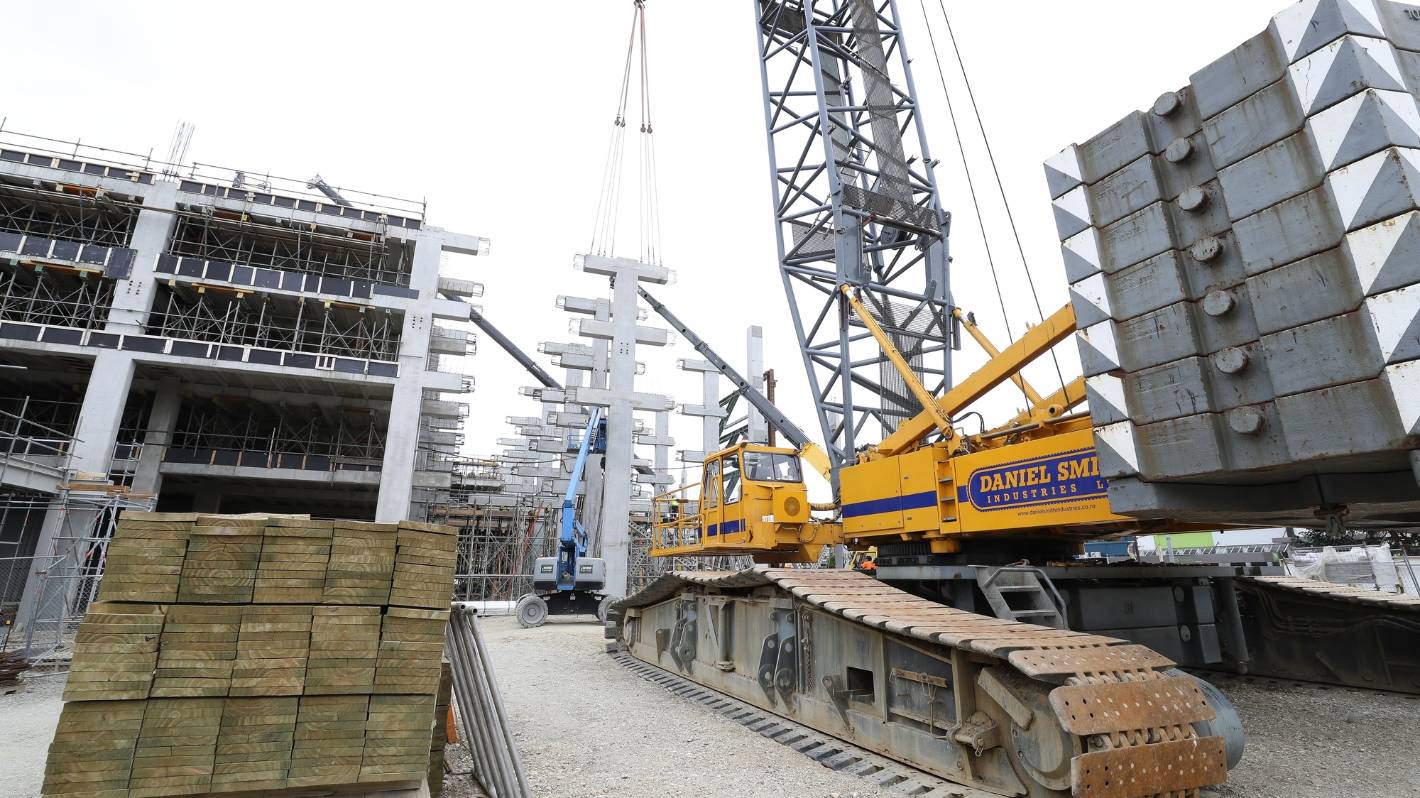 The 86th of 89 precast concrete columns being erected for the car park building in the Invercargill Central downtown development, which now stands at $180 million.

Invercargill City Council is proposing to invest an additional $30 million in the development of the town center blocks through a short-term loan along with other investments.

In 2020, the Council agreed to invest up to $46 million in the development led by Invercargill Central Ltd.

The development will include retail, catering and parking facilities.

The overall cost of the project was initially set at $165 million, which included a commercial bank loan of nearly $50 million, subject to commercial terms.

However, the project was unable to make those commercial terms work, according to the council.

The council said it had taken longer than expected to accept leases for retail space and needed more incentives to bring tenants into the block. This, in turn, has impacted banking conditions for loan funding.

Thirty-one of the development’s 50 units of varying sizes have now been rented. This equates to 85 percent of the floor space in development.

It was proposed that the council and the HWR Richardson Group would both provide a short-term loan of $22.75 million each to cover this commercial bank loan shortfall.

The board expects it to be paid off in about two years, from January 2022 to December 2023, once bank financing becomes available to replace it.

The Council plans to make a commercial return on its loan to Invercargill Central.

In addition to the shortfall in commercial bank loans, the total projected cost of the project has increased from $165 million to $180 million.

The Council attributed the $15 million increase to several factors, including increased construction costs, bank charges higher than originally anticipated, and the cost of amenities/incentives for retail spaces that were significantly higher than expected.

The purchase of the Reading Cinemas building also meant additional investment to create connections to the Piazza area of ​​the development.

Seismic strengthening of the Reading Cinemas building is also required.

To cover the additional $15 million needed for development, it was proposed that the board invest an additional $7.5 million, with HWR Richardson Group investing the remaining $7.5 million.

The Council has opened a public consultation on the proposal.

Hearings are scheduled for February 16 and 17 before the council makes a decision.

The other option presented in the consultation document would be to provide a loan of $10.07 million to Invercargill Central Ltd, the company behind the development.

This would be the minimum required by the current shareholders’ agreement.

However, the consultation document says this could put the project at risk, with developers having to deal with the implications of this shortfall.

“This option was assessed as a higher financial risk as the terms of the loan would mean that the Council and HWR would not be given repayment priority over other loans and a significant delay in repayment could impact the ability of the Advice to borrow for other Council projects.”

Council chief executive Clare Hadley said that while there are always challenges with big, important projects like this, she was confident of a positive outcome.

Hadley said that while the project is progressing on time and on budget, the economic impacts of Covid-19, uncertainty surrounding both construction and the supply chain, rising costs and funding limitations Banking for the development phase meant that additional investment and loan financing was needed to complete the project.

“We know our residents and those who visit us from across the region have been filled with anticipation seeing the construction progress,” Hadley said.

“Our community truly feels a sense of pride and satisfaction seeing these steps towards a vibrant and livable new city.

In addition to the proposed increase in its investment in the development of the block, the council is concurrently consulting on its proposal to invest an additional $13.6 million in the second stage of its street improvement work in the city.

The impact on council debt would be an increase of $13.6 million, resulting in a 1.3% rate increase.

LiveVox: 5 Ways Customer Expectations for Retail Banking and Payments Have Changed in 2022