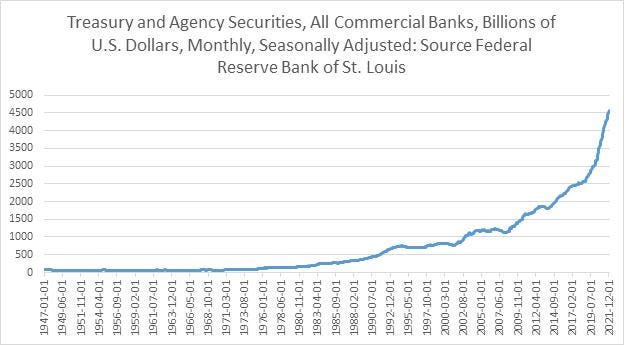 Of course, we know who is the first. Which? Exactly. The Fed. The Fed holds more Treasuries than any other central bank in the world. According to data from the Federal Reserve, as of this month the Fed holds more than $5 trillion in Treasuries, compared to just over $4 trillion held by all other foreign official buyers. As I’ve written before, the Fed also owns nearly 25% of all TIPS (Treasury Inflation-Protected Securities) because it has bought more than the total issuance of TIPS to drive negative real returns over the past few years. years. And we also know that last month, during the Jerome Powell pivot, the Fed basically guaranteed that it wouldn’t buy many more Treasuries in a relatively short period of time; that is, in March, if you own TIPS, you better own them.

What’s second? Commercial banks. The St. Louis Fed’s FRED (“Federal Reserve Economic Data”) database shows that commercial banks hold $4.5 trillion in Treasury and agency securities (here). We also know from the last earnings report that one or two big banks (you know who, right? – sorry for the pun) bought hundreds of billions of these Treasuries . Now, why would the big commercial banks buy all those Treasuries at such deeply negative real yields? One can only speculate, and the reason probably lies somewhere between being forced into it, for various reasons, and because buying the bonds and selling them to the Fed in their “asset purchases” was to money too easy to pass up.

The thing is, now many of these banks are stuck with bags full of low-yielding Treasuries, maybe like that turkey I warned about (here). The non-economic (Fed) buyer will soon stop buying them and, in a few months, will begin to “run off” their existing holdings. Who will intervene and at what cost? Are there enough “big fools” on the market? Is it Thanksgiving for the turkey?

Historically, the marginal buyer of Treasury bills has been a foreign entity; for example from Japan. For nearly a decade, Japan has been able to print money freely and exchange the yen for dollars, among other currencies, which are then recycled into treasury bills of all maturities. You can think of this as an asset-based American “retirement plan” for Japan, funded with their play money. The yield does not matter, only the repayment of the principal account. So the hope would be that if Treasury yields rise a bit more, they will likely rise again to buy them. Belief in the willingness and ability of foreigners to finance at negative real rates of return. Hoping for the return of the greatest madman.

Back to the banks.

Mass holdings of bonds are not their only problem. As the frenzy of trading activity in equities begins to subside, banks that provide “financial services” understandably make less money thanks to the slower speed of transactions. Thus, the increase in yields has been reduced twice – first by reducing the value of holdings, then by chilling animal spirits who want to trade. But aren’t higher yields good for banks because they earn more interest? Not yet, in my opinion. Right now, the immediate effect of rising yields is to damage balance sheets and reduce corporate earnings. Yield income takes time, price losses occur immediately.

Then there are astronomical compensation costs. I’m sure you’ve all read the mind-boggling figures regarding bank bonuses. Part of that is being funded by record earnings amid the COVID-induced trading and trading frenzy, and another part is being funded by record bond issuance at historically low yields and spreads. It is no wonder that bank bond issuance is skyrocketing, and the more bank debt that is issued, the higher the spread, meaning the higher the discount factor applied to future bank earnings. Which means lower stock prices of commercial banks.

Now you wonder who the third one is. Of course, I don’t know. But I guess it’s various types of buyers who don’t pay attention to yield. This group includes passive holders of bond funds that have seen their value skyrocket over the past two decades, foreign private buyers looking for yield, and public pensions that are in an accounting regime where they have to buy bonds without risk to manage liabilities. . There are also systematic momentum traders who buy simply because, at least in recent history, bonds have only gone up, and quantitative investors looking for “risk parity” who elevate bonds to the same risk as the actions. This group could also include you – it certainly includes me and my long-forgotten bond fund. Who knew that “safe” investments could lose so much?

So what can we do?

Like in baseball, the third has no choice but to pay attention to who is first and what is second. And these two are stuck. And because these two players have a much bigger impact on the market, those in the third would be well advised to steal the house before forcing an inevitable implosion of the bond markets. If banks are your thing, look to regional banks – and make sure they (1) aren’t huge owners of treasuries and agencies, (2) aren’t dependent on the volume of transactions to be profitable, (3) have low outstanding debt. You won’t get the proverbial ‘toaster’ to open an account – which is reserved for prime clients – but your investment probably won’t get toasted.